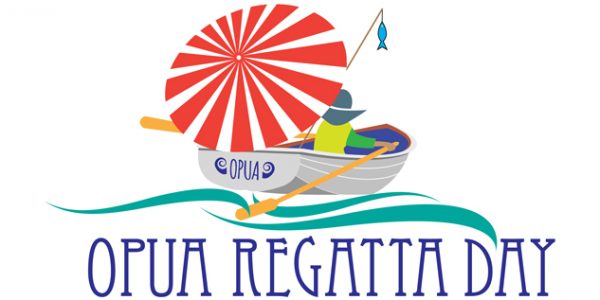 Currently, I’m on a boat (sounds like a song!)—a sailboat to be exact—located in the lovely waters of New Zealand. For a number of years now, my family has returned during the northern hemisphere’s winter to the boat we sailed here from California, creating an endless summer of sorts for us, due to the opposite seasons. As one of the many “sparrows” (those whose migratory return from islands in the South Pacific is annual), we feel nearly like locals now (although, with our clearly-Californian accents, the real locals may not agree!).

Recently, I was asked to contribute a t-shirt design for the local school’s fundraising Regatta Day that included rowing, sailing, and fishing competitions along with food booths and games, with a brief for it to look somewhat “old-time-ish” and festive. Time was of the essence, but, we were finally casting off the dock lines for some long-planned coastal cruising to some relatively remote anchorages. Thus, the internet was rather scarce, or, slow if available at all via a USB plug-in mobile stick device. The boat’s power comes primarily from solar panels and a wind generator, unless we run the engine which is avoided whenever possible due primarily to heat, noise, exhaust, and fuel consumption.

Thus, my usual connection to cyberspace was severely thwarted—which isn’t necessarily a bad thing (unless you are under a demanding deadline requiring communication with a client)! Working on my MacBook Pro laptop, with the boat’s inverter switched on (which does suck battery power), I was able to create a vector illustration that I hoped would be suitable for the kids and other participants wanting to support the school. Thus, in the middle of “nowhere,” this is the design that evolved, hand-drawn in Illustrator from some sketches that I made, inspired from part of a photo I had taken of our friend rowing his dinghy amongst leaping dolphins. It was eventually squeezed through the interweb tubes to the DTG printer producing the shirts—just in time. Hope they sold a few. Wouldn’t you buy one for NZ$15 (about US$11.25)? After all, it’s for the children!

This site uses Akismet to reduce spam. Learn how your comment data is processed.